John 20:1, 2 Early on the first day of the week, while it was still dark, Mary Magdalene went to the tomb and saw that the stone had been removed from the entrance.  So she came running to Simon Peter and the other disciple, the one Jesus loved, and said,” They have taken the Lord out of the tomb, and we don’t know where they have put him!”

Prayer:  Lord Jesus, we remember that by the power of God no tomb could keep you as its prisoner.

Thought for the day:  Jesus’ faith in God even on the cross was rewarded when he arose from the grave.

Matthew 2: 11 On coming to the house they [the magi] saw the child with his mother Mary, and they bowed down and worshiped him.  Then they opened their treasures and presented him with gifts of gold and of incense and of myrrh.

Prayer:  Lord Jesus, from the time of your birth you were destined to give your life as a sacrifice for the salvation of the world.

Thought for the day:  Myrrh and aloes were combined for a rich perfume for weddings and burials. (See Psalm 45:8)

John 19: 38, 39 Later, Joseph of Aramathea asked Pilate of the body of Jesus.  Now Joseph was a disciple of Jesus, but secretly because he feared the Jews.  With Pilate’s permission, he came and took the body away. He was accompanied by Nicodemus, the man who earlier had visited Jesus at night.  Nicodemus brought a mixture of myrrh and aloes, about seventy-five pounds.

Prayer:  Lord Jesus, like Joseph and Nicodemus we long to honor you in all things.

Thought for the day: If you want to honor Jesus, honor his disciples in their hour of need.

Matthew 27:59, 60 Joseph took the the body, wrapped in a clean linen cloth, and placed it in his own new tomb that he had cut out of the rock.  He rolled a big stone in front of the entrance to the tomb and went away.

Prayer:  Lord Jesus, may you be our guide when we must take the last journey to the grave

Thought for the day: The songwriter said, “Man of Sorrows, what a name for the Son of God who came, ruined sinners to reclaim.  Hallelujah, what a savior.”

John 20: 19, 20 On the evening of the first day of the week, when the disciples were together, with the doors locked for fear of the Jews, Jesus cam e and stood among them and said,” Peace be with you!” After he said this, he showed them his hands and side.  The disciples were overjoyed when they saw the Lord.

Prayer:  Lord Jesus, we have heard the testimony of your disciples, and we believe you arose.

Thought for the day:  No one better than the disciples could have been found to verify that it was Jesus who arose from the dead.

Thought for the day:  Lord Jesus, you were raised to live forever more.

Thought for the day:  When the new plant appears, the gardener does not wish to have the seed back.

I Peter 1: 3 Praise be to the God and Father of our Lord Jesus Christ!  In his great mercy he has given us new birth into a living hope through the resurrection of Jesus Christ from the dead.

Prayer:  Lord God, in Jesus you have given us a hope beyond this world.

Thought for the day:  Behind the darkest storm clouds there is a sun that shines.

Empty – The women found the grave to be empty.  Jesus was risen from the dead – John 20:1 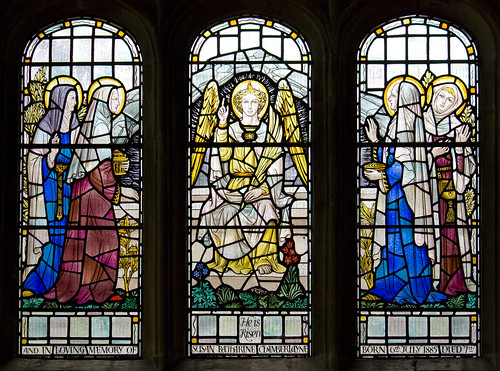 //embedr.flickr.com/assets/client-code.js
photo: “He is risen!” by Lawrence OP on http://www.flickr.com