Note: Before his imprisonment Paul had spent over two years preaching and ministering in the city of Ephesus.  This city was one of the three most populace cities of the ancient world, and its temple of Artemis was considered one of the Seven Wonders of the ancient World.  Artemis was a fertility goddess of the time.

Holy Spirit – vs. 1-7 — In Ephesus the Spirit was present, but believers needed to experience the Spirit in their individual lives.  As immersed believers they had the Sprit, and with the apostolic blessing they had the miraculous power of the Sprit.

Evangelism – vs. 8 — Paul remained in Ephesus for the purpose of evangelism.  He wanted to reach the world.  If only the leaders of the church would desire to reach all in their community today, the world would begin to change for Christ.

Asian Province – v. 10 — Paul remained on in the province for more than two years, and with the help of other Christians many more were won to Christ. The text says all heard.  Have all within our community heard the good news?

Demonic Deliverance – v. 13-22 — Demonic powers continued to hold sway over the lives of many.  They feared Paul as an adversary, but the hypocritical were no match for their powers.  Today we must know where we stand if we are to deal with the forces of evil. Only if we prove to be genuine followers of Christ can we withstand the demonic spirits of the world.

Exemplary story:  Pigeon Forge is a popular resort town I have visited. Family and friends relish trips there, since it boasts many souvenir shops.  The town’s economy is driven by its tourist trade. Ephesus was a resort town, and its main attraction was one of the seven wonders of the ancient world,  the temple of Artemis.  Visitors could buy charms and trinkets from the temple that honored the goddess of fertility, Artemis.  When Paul brought the Gospel to Ephesus, the very economy of the town was in jeopardy.  People began to abandon their preoccupation with the worship of a goddess of trinkets for the worship of Jesus, the Son of the living God. 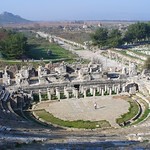 Animosity will end v. 1 The time of distress and conflict will end.

Waiting will end v. 2 Deliverance will come.  The prophesies will be fulfilled.

Anxiety will end v. v. 1 If your name is written in the book, you will have no more worries. As Freshmen in a Christian college we signed a book called the “Book of Life”  We were enacting a drama that will come to pass at the end of the age.

Killing will end v. 2. They dead will awake to life.  The little children who were killed while they were going to church will live again.  Thanks be to God.  Here is an Old Testament reference to the coming resurrection.

Eternity will just begin v. 3. The wise and the righteous will shine for ever and ever.  The hymn writer asked, “Will there be any stars in your crown?”  For the faithful the answer is a resounding Yes.

Exemplary story:  JoAnn was not expecting an answer when she ended her phone call. She had just situated her two-year-old daughter in her car seat when the phone rang.  JoAnn’s husband had called to say that a worker had been injured on the job, and he was asked to stay late tonight to finish the daily quota, and he would be working through the weekend.  Their wedding anniversary plans would have to be postponed.  The baby sitter would not be needed for the evening. With tears in her eyes the mother spoke aloud without thinking and said, “When will it ever end?’ To her surprise the mother heard her two-year-old repeat a phrase she had picked up somewhere, “God only knows.”   JoAnn looked in the rearview mirror to see the two-year-old smiling contentedly.  This time JoAnn was thinking when she spoke aloud and said to her daughter, “Jen, you are so right.  God only knows.”  God knows the outcome of life, and from that we can take great comfort.

Insult – The advisors prompted the king to set up an idol.

Edict – The advisors incited the king to issue a do-or-die edict.

Reliance – Before they were tested the three expressed their faith in God and their faithfulness to God.

Yokefellow – There were 4 persons in the furnace and not three; and the king said the       fourth was like a son of God.

Exemplary story:  Ashley Sidney Johnson found inspiration in the story of George Mueller.  When he ran a school for boys George Mueller believed the promise found in Matthew 6:6.  When he prayed he would trust no one but God to supply his need, and God did so.

Divulgence in a dream – Though the message was gone like a fog, it was sent from God.

Rampage – The king asks, “If you cannot interpret the dream, what good are you?”

Entreaty – Daniel made prayer a priority and enlisted the prayers of others.

Answer – Brain wave theorists say the delta brain waves put us in touch with a deep and common thought pattern.  Daniel had a vision of the dream God sent.

Meaning – As Daniel relates the dream it gives reassurance for now to the king and for us             later.  The stone is the stone of stumbling that grows to into the church.

Exemplary story:  There is a passage in the writings of the poet Carlyle that I treasure.  It tells of a man who dreamed he walked in a field of flowers.  When he awakes he finds a lily upon his breast.